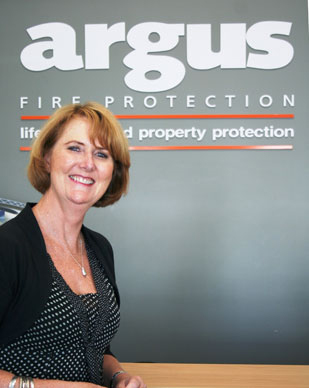 Having good people and understanding that cash is king in today’s testing business environment are just two reasons why Argus Fire Protection has quadrupled in size under its Managing Director Jacqui Bensemann.
Argus Fire Protection, founded in 1981, is a New Zealand owned and operated company with a well established history and reputation second to none in terms of its service, quality and competitiveness.
Managing Director Jacqui BensemannJacqui has headed the business since 2001 following the sudden death of her father Erle, who was killed while driving at Pukekohe. Erle had purchased the business when it was a small sprinkler contractor, adding fire alarm services.

“He died as a very young 73-year-old with the heart of a 40-year-old. He was a very intelligent man, a great thinker with great ideas. It happened when, for the first time in his life, he had both money and time together,”

Having worked as General Manager for Argus in the two years prior to the tragedy, Jacqui took the reins. A chartered accountant by trade, she had worked in London during the early 1990s before returning home in 1995. Her young family originally settled in Wellington, moving to Auckland when her husband David Leggat secured a job at the New Zealand Herald. He is the current Chief Sports Reporter.
Jacqui says the step up from General Manager to Managing Director was huge, and admits she struggled in the initial years. “With the benefit of hindsight, I required more help and guidance than I thought I did.” Jacqui could see the business had huge potential, but she couldn’t do it all herself. “I had the energy and passion and some great ideas, but didn’t know what to do with them. I tended to go off on all sorts of tangents because there wasn’t someone to help guide me to a more disciplined, focused approach.”
The Board agreed and Pekka Orpana was appointed as an independent director. Pekka transformed Plumbing World into New Zealand’s leader in its field. Jacqui describes the Palmerston North-based businessman as “an outstanding mentor”, who has helped bring out the best in her management style. “My father was more of the old school, autocratic style when he was in charge, whereas I take the more consultative approach, although I’ve learnt to take the hard-nosed approach when needed.”
During her time as Managing Director, Argus has not only seen rapid growth but a change in direction. During the past five years the business mix has changed from being 60% contract work (the setting up of systems) and 40% service to 30% contract and 70% service. “Contract work is great for visibility, but it’s a high-risk, low-margin field and there’s a lot of undercutting going on,” she says.

“Servicing provides a more regular income. We’ve succeeded because we know in order to maintain good service, you need to invest in a solid infrastructure with well trained and qualified people.
It may cost more, but not as much as your reputation if you’re not providing the service needed.”

For more about Argus, visit their website here; www.argusfire.co.nz

The main lesson out of the Argus Bensan story in respect of succession planning is this:
If you wish your family to nurture and grow a business post your retirement or demise it takes time, discussion and active sharing of involvement.
Most business owners cannot rely on their children to share their dream, in fact mostly children don’t. To deliver a different outcome, you must, from an early age, actively encourage your children in enterprise, you must share with them your skills and knowledge and you must involve them early in the business and encourage them to at first share, and then assume responsibility. Jacqui’s success is her father’s preparation, her own determination and her seeking of assistance when needed from trusted advisors.
When her father formed the company he shared the ownership with three of his past associates who had been with him through his business life in similar businesses that he had built up and sold. I was fortunate to be admitted into this inner sanctum as the fourth shareholder and became part of the trustees’ advisor and owner group.

Chinese
Services
Next Post
Rose & Thorne – Extraordinary Everyday
Rose & Thorne design innovative lingerie items. They’re about taking a fresh sheet of paper and creating the world’s best everyday intimates using a truly contemporary approach. The company is 100% employee-owned and was founded in 2011 by Stefan Preston and Sue Dunmore. Stefan and Sue were both CEO and Head of Design respectively for […]
Marion Garlick
READ IT
A battle of wills – negotiation tactics
Imagine if you will, a boxing ring. The arena is dark, there is no audience and there are only four people present – the guy in the red shorts, the one in the blue shorts and a second for each boxer. The second for the boxer in the blue shorts has had many years of […]
Lisa Garrud
READ IT
View all of our services
Find out about our team
Look through our articles
Read more about our history
Business Advisory Services
Marketing Services
Tax Specialist Services
Value Added Services
Get in touch with our team
Want to ask a question?
What are your opening hours?
AML & CFT Act in New Zealand
Events with Gilligan Sheppard
Accounting software options
Where are you located?
Events