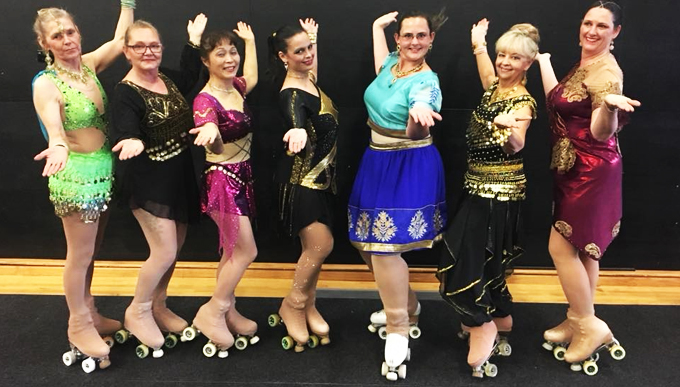 The Creative Solo had a Middle Eastern theme

I recently competed at the Oceania Artistic Roller Skating Championships. I put a lot of pressure on myself and it resulted in a gold and silver medal for New Zealand. But was it worth it? I’ve come to the conclusion that it was – but changes need to be made. The results of which I discovered are very similar to running a business…

Learn from your competition

If you watch what they do, you can learn what works and what doesn’t. Constantly keep your eyes and ears open around your competitors and their supporters/clients. It’s important to learn from your own mistakes, better to learn from their mistakes and even better still to learn from their successes.
“I never lose. Either I win, or I learn.” And if you can win because of learning from a lesson someone else had to take… well, where’s the downside in that? I overheard a coach talking with another coach and discovered I had one too many turns in a routine. During my warm up, I was quickly able to adjust and then perform and win a silver medal – had I not, I would’ve been deducted marks and dropped to a bronze.

If you don’t know what the judges are looking for, you won’t know how to impress them. I could spend a massive amount of time learning a new trick… but if it’s only worth 0.2 of a mark, why would I collect all those bruises in training? Same goes for your customers, are you selling what they actually want?
I learned at the previous competition that a fall during a routine doesn’t mean you get dumped to the bottom. As per motivational quotes, it all depends on how quickly you recover. I fell during a backwards skating sequence and still managed to obtain the gold because it was only worth 0.2 deducted off my mark – all because I quickly got back up and continued without delay. A worse recovery would’ve meant a full mark lost. At all my trainings now, I get up quickly so that it’s a habit (mostly I try not to fall at all though).

Being competitive doesn’t mean your ethics go out the window and you’ll “win whatever the cost”. If you’re not happy with the person you are at the end, then it’s not worth it.
I have competitors whose nerves can get the better of them. I could play on that – in the marshalling area where we all wait for our turn, I could upset them with a couple of sentences. An Australian competitor tried it on me once… “You know what the one thing my coach told me to remember… whatever you do, don’t let a Kiwi get on the podium.” The joke was on her though, because I used it as fuel to make sure I got up there!
Ultimately, I want my competitors to do their best, because I want the win to be worth it. It makes the victory that much sweeter and makes the loss all the more respected. The way you talk about your competitors says a lot about you. And it doesn’t take much for someone to form an opinion – we’re quite a judgemental society whether we like it or not.

Consider your strengths and weaknesses regularly – recognise them, get help where you need to, work on your own limitations and maximise what you do well. Coaches are great for this and I see no difference in the business world.
The opinion of an outsider will always bring you down to earth, but it will also make you rise to impress if you have that competitive streak. Make sure they’re trustworthy, that you respect their opinions and thoughts – but that you can also keep working with them should you have a difference of opinion.

You have to have fun or fulfilment (or both) to be successful, it’s not just hard work. It’s easy to go through the motions of day to day activities, or just roll around the floor with skates on. Sure, it contributes overall, but without the passion, you’ll eventually fail.
Adaptation is key – new competitors, new rules, and game changers. The competitive person will see these as an additional challenge (albeit after a big sigh and bit of reframing).

Suck it up sunshine

Oceania’s was a challenge. I’d injured my shoulder and needed an injection to be able to use it again – and the run around making sure Drugfree Sport was happy with my pain management plan was boggling. Two Australians who had beaten me the competition just three months prior were crossing the ditch to compete against me again. I was also the title holder from 2017 – Oceania Masters Dance. I’d already finished the first portion of the event and was a front runner… all that was left was the Creative Solo event.
The same day as my dance event, I’d competed in my figures event. I’d won a silver medal already that day, I’d gone through the stress and nerves of competition, followed by the adrenaline rush of achieving success. A New Zealander won gold with 93.6 points and I was so close with 93.3 points. I was drained already.
I’d tell myself ‘suck it up sunshine, this is your only chance’ and think it quite normal, still do really. In the middle of my routine I vurped (vomiting plus burping but swallowing). The scores were read out, there was nothing more I could do. A while later the results were announced… And the gold medal for Masters Dance goes to…. Representing New Zealand, Lisa Garrud!
The tears wouldn’t stop, the accomplishment felt so overwhelming, even I didn’t realise it meant that much until the journey was done. Thank you to my coaches Madi Collis and Leanne Raffles and my support Deb Collis – it could not have been done without you.
Author: Lisa Garrud, Link through to Miss Skate on Facebook for more photos; https://www.facebook.com/MumOnWheels/